The Best Western Tamarindo Vista Villas is situated across the street from the beach as you enter Tamarindo, Costa Rica. It is an older hotel with lots of character, great ocean views and amazing staff. They are built on the side of a hill with regular hotel rooms up top, many with amazing views of the ocean. Below they have the villas which seem about 700 square feet, though their views aren’t quite as good but have huge porches to make up for it. 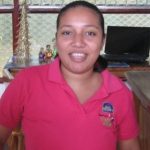 The best part of the hotel is the staff. They truly make the hotel. While I only got to know a few of the workers, I wanted to give them all a special shout-out.

I didn’t get to know the rest of the staff as well as those above, but everyone was very helpful. Trevor does a great job in picking his crew.

Nowhere is perfect and, of course, there are places where the Vista Villas can improve as well. I trust some of these issues will be worked on and some just make business sense.

The standard rooms are relatively small but have amazing views. 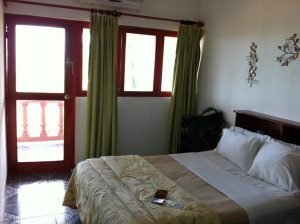 The villas are large. My guess was about 700 square feet. There is a Queen (I think) bed in the bedroom which is separated from the living room by a big window where you can close the shutters. The bedrooms have visual but not sound privacy. The living room couch is two day beds, approximately twin sized. The kitchen is a decent size with a full electric stove top, dorm room fridge and small microwave. There is also a small dining room table for four. The best part is the huge porch, though I never took advantage of it.

I only tried the restaurant for breakfast so I can’t speak to much else. The included buffet is better than the typical continental breakfast. They usually have four types of fresh fruit (including amazing cut pineapple), a few breakfast cereals, a cake of the day, yogurt, white and dark sliced bread, jellies, butter, milk, some type of juice or juice drink, water and coffee (note I could have missed a few things).

For more information about my trips to Costa Rica including restaurants and hotels in Liberia and Tamarindo, trips to the national parks, surfing and more, see my detailed Tamarindo Trip Report.