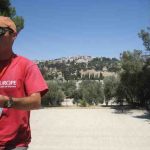 We took both the Holy City Tour and the Free Tour with Sandeman’s. We loved the holy city tour. It was very reasonably priced and great. Our guide was Moki Schwartz. Moki was getting a masters in History in Jerusalem so really knew his stuff. 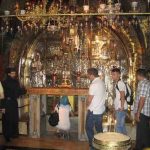 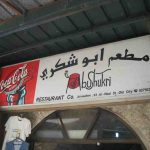 We spent probably 30 minutes in and around the Church of the Holy Sepulchre learning a lot about its interesting history and modern trivia along with the Christian element of Jerusalem.

Moki also brought us to an amazing lunch at Abu Shukri Restaurant (02-627-1538) in the Muslim Quarter. It was US$10 for a soft drink plus all you can eat Falafel, pita, hummus, bean dip, french fry, veggie, etc. 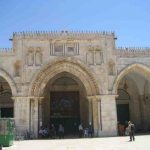 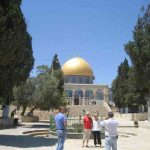 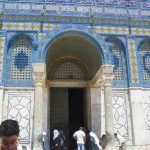 We spent another ~30 minutes on the Temple Mound focused on the Al-Aqsa Mosque and the Dome of the Rock along with much of the Muslim elements of Jerusalem and the way the city has been built up in layers. 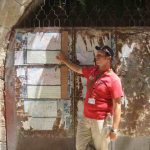 The following day we took Sandeman’s Free Tour. It was fine, but not as good as the Holy City Tour. Although there is no official overlap between the two tours, you do feel a bit of déjà vu when you take the Free Tour second. Oh, and as to the size of the Free Tour, it can be very large. Seemed like 40+ people showed up. We were very luck in that there was a extra guide available that day (clearly not normal) which allowed them to split the groups (though the first guide didn’t seem so happy about it). We ended up leaving the tour a bit early so we could have time to “climb” the Mount of Olives before heading back. I would still recommend this tour for someone that has limited time or a limited budget or wants a single tour to get an overview of the old city prior to being there for a while. Though if only doing one tour, I would pay up for the holy city.

Read more about our trip to Israel.