Everyone wants that island getaway trip that forces them to forget about work, school, paying bills, LIFE! But when it comes time to plan, the picturesque postcard beaches seem so far out of reach. Why? Because the travel prices and locations of any island are not as ideal as those of your average coastal beach. But really, all it takes is a quick glance at a map and a little internet research to realize an island destination might not be as inconvenient and pricey as it seems.

After spending a little over three months living and studying in Seville, Spain in 2010, my friends and I decided to take advantage of our week long spring break and head to the beach. So we thought, what better place to go than the Greek Isles, right? Wrong. Not only were we three months into a four month study abroad experience, but we were broke! We came to the realization that our budgets would not allow us to travel to Greece from Seville and the drawback left us upset in an internet cafe in Seville without any spring break plans.

Well, funny how things work out for the better. Later that night, I received a call from my friend who still had not given up on the idea of heading to the Mediterranean Sea for spring break. I remember her call telling me that we could fly from Madrid to the island of Palma de Mallorca for 30 € round trip. I was shocked, and as I quickly added up a 35 € round trip bus ticket from Seville to Madrid, I realized it would cost me 65 € to get to my beach destination spring break trip. Without hesitation, we booked it. We were headed to Mallorca.

The next step was booking a place to stay. To our surprise we were able to find cheap hotel rooms instead of the infamous 12-person-to-a-room hostel rooms.  Even better, the rooms at the hotel were 60 € a night for a room with three beds. My two friends and I went in on paying for a room so it would only be 20 € a night for each of us for three nights. We were thrilled. We found out that we were getting such great deals because it was the “off season” on the island in April, but we did not care. The less people on the beach, the better! I was ready for my trip! I estimated I would spend about 300 € on the trip in total on food and activities. I was wrong. When we arrived at the hotel, we discovered there was a brunch buffet and a dinner buffet included. For 20 €  a night per person.

So let’s add this up.

The whole experience was so cheap that we spent at least a month after the trip asking each other if we had received any “extra” charges from the hotel or the airline. We never did. And now, since I have returned to live in Spain and have started to travel once again one year later, it is still the cheapest trip I have ever taken.

1.) Despite what the travel experts might say, do not hesitate to take a trip during the “off season.” With a trip as cheap as my trip to Mallorca, it’s worth the risk! The weather in Mallorca in the middle of April was absolutely beautiful. During my first day on the beach, the sun was burning hot and I even got sun burnt while wearing sunscreen. All of the Spaniards shook their fingers at us when we told them where we were headed. They said it was going to be way too cold. But when I returned, all they needed to do was look at my newly tanned skin to know that the weather (yes, even in April) was more than acceptable.

2.) Sometimes the trip you have in mind might not be the trip you are meant to take. Be open to options! I cannot say it enough. Was I upset that I could not get to Greece? Of course I was. But I got to the Mediterranean and I loved every minute I spent on that beach during the day and the amazing sunsets at night. After seeing how much money I saved, I was more than happy with my decision.

3.) Take advantage of the deals around you! Would this trip have been as cheap if you were to go from the United States? Definitely not. But I was in Europe and the deal was too good to be true! Never limit yourself to one city. If you wind up in a foreign country and plan on remaining in one city for an extended period of time, check out the sites in other parts of the country or around that city. It never hurts to do a little research and venture outside of your travel plans. Most likely you will find great deals that will leave you with great photos, great memories and a whole lot of money left in your pocket. 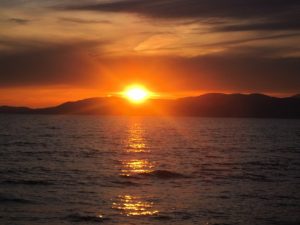